If you have any questions then please check out our FAQ's page. Alternatively you can click here and complete our online form and we will reply within 24 hours.

Sign up to our exclusive newsletter and be the first to hear of any special offers or promotions.

Seen one of our products cheaper elsewhere?

Call us and give us the opportunity to beat it and save you money!

Managed to find and book a Disney Hotel at a very good price, we're really pleased.

I must say what a great website you have, nice and easy to book through and great prices!

Genuinely could not find a villa through a reputable company any cheaper online. Great work!

A real pleasure to book through a specialist agent. They provided me with all the information I needed and the villa was fantastic!

What nice people! Would recommend to a friend

Universal Orlando is a world of action and thrills with two amazing theme parks as well as non-stop nightlife. Islands of Adventure features rides and attractions that bring favourite myths, cartoons, comic book heroes and children’s tales to life, while Universal Studios invites you to jump into the action of the movies with rides themed around popular recent films.

And the entertainment doesn’t stop there – Universal Orlando continues into the night with a 30-acre entertainment complex with live music, casual and fine dining, dancing, shopping, movies and other entertainment, such as performances by the world-renowned Blue Man Group. The Wet ‘n Wild water park is also located next door, and tickets can be purchased for admission to all three.

This park is composed of several distinct "islands", each with its own theme. Starting off in the Port of Entry you can make your way through Marvel Super Hero Island, Toon Lagoon, Jurassic Park, The Lost Continent, and Seuss Landing, each with its range of related rides such as: 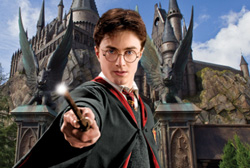 The Wizarding World of Harry Potter

Visit your favourite places and experience the exciting attractions from the entire collection of Harry Potter books and films! Ride on the Hogwarts Express to Hogwarts Castle where you can explore the castle grounds and visit Ollivander’s or Filch’s Emporium of Confiscated Goods. 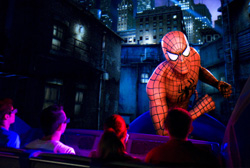 The Amazing Adventures of Spider-Man 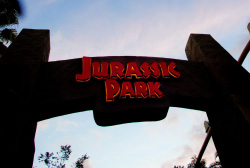 Experience the real Jurassic Park where dinosaurs have been brought back to co-exist with man, and take a thrilling river raft ride through primeval dinosaur habitats.

Ride the Movies at Universal Studios! At this real film and television studio you can go behind the scenes, beyond the screen and right into the action. The park consists of six themed areas for kids of all ages – from Woody Woodpecker’s KidsZone to Hollywood – and features activities and rides that are inspired by popular films, such as: 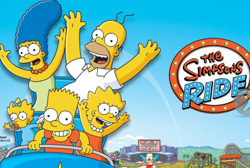 Join Homer, Marge, Bart, Lisa and Maggie on a visit to Krustyland, the low-budget theme park created by Krusty the Clown. There is one surprise after another as you embark on a wild ride through the park, flying, floating and crashing your way through Krustyland’s kiddie attractions, stunt shows and thrill rides. 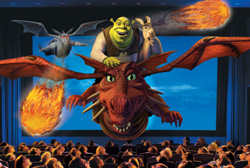 Join Princess Fiona and company on an adventure that picks up where the movie left off. Featuring an original 3-D film plus an extra dimension of special effects, you will see, hear and feel the action right from your seat!

Planning your trip to Universal Orlando

Universal Orlando is a short drive from Orlando and is easy to get to by car using the Interstate 4.

There are a variety of ticket options depending on how many visits you want to make, and how many other attractions you would also like to go to. For instance, discounted tickets can be purchased for admission to the two Universal Orlando theme parks plus the Wet ‘n Wild water park next door, as well as for entrance to many other Florida attractions.

The Universal Meal Deal ticket allows you to eat as much as you like for the day at any of the theme parks’ 6 participating restaurants – covering a variety of food options such as Asian, Italian, Chinese and Mexican food as well as burgers, pasta, pizzas, chicken and salads.

With so many things to see and do at just this one massive attraction – and with so many more to explore – you’ll need a place to stay while you play. An Orlando villa holiday offers the ideal solution – choose from a range of villa rental options to suit your family and budget, and stay close to the action.

For more information on Florida's major attractions, select from one of the following dedicated attraction guides: